World music-influenced electro-dub masters Thievery Corporation will be playing Fillmore Auditorium on Friday 26th October 2018! The band, who are promoting the release of their latest groove-filled offering, Treasures From the Temple, will be supported by Grammy-nominated reggae artist Julian Marley! Come feel the good vibes! 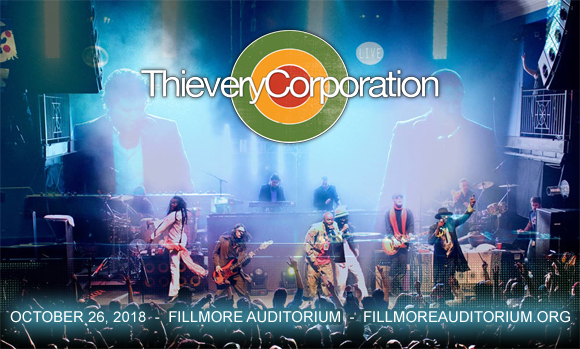 Formed in 1995 in Washington, D.C., Thievery Corporation are an American electronic duo, whose music draws influence from a variety of genres, including dub, jazz and world music, particularly bossa nova. Sounds from the Thievery Hi-Fi is the duo's debut EP, released in 1996. They have incorporated many languages into their lyrics over the years, English, Spanish, French, Italian, Persian, Portuguese, Romanian and Hindi, and they have recorded with a variety of guest vocalists, including Emilíana Torrini, Pam Bricker, Perry Farrell, David Byrne, and Wayne Coyne of The Flaming Lips. Their tenth studio album, Treasures From the Temple, was released via ESL Music in April 2018.