After taking a career hiatus in 2012, seminal rap and hip-hop group has dropped the word and made it official — Three 6 Mafia is all geared up for a reunion tour. Founding members Juicy J and DJ Paul are quick to add — “To quote LL, don’t call it a comeback, we have officially been here for years, and we’ve got a lot to show for it. Just wait to see what comes next.” Indeed their legions of fans are looking forward, especially those in this side of town as they listed the Fillmore Auditorium as one of the venues that will stage this amazing coming together of the Three 6 Mafia and their fans on Friday 6th March 2020. Don't dread thinking about long queues for tickets, because you won't have to endure one. Just click 'buy tickets' on this website, and voila! you'll be holding a hot ticket in your hands. Easy peasy! Book your tickets now! 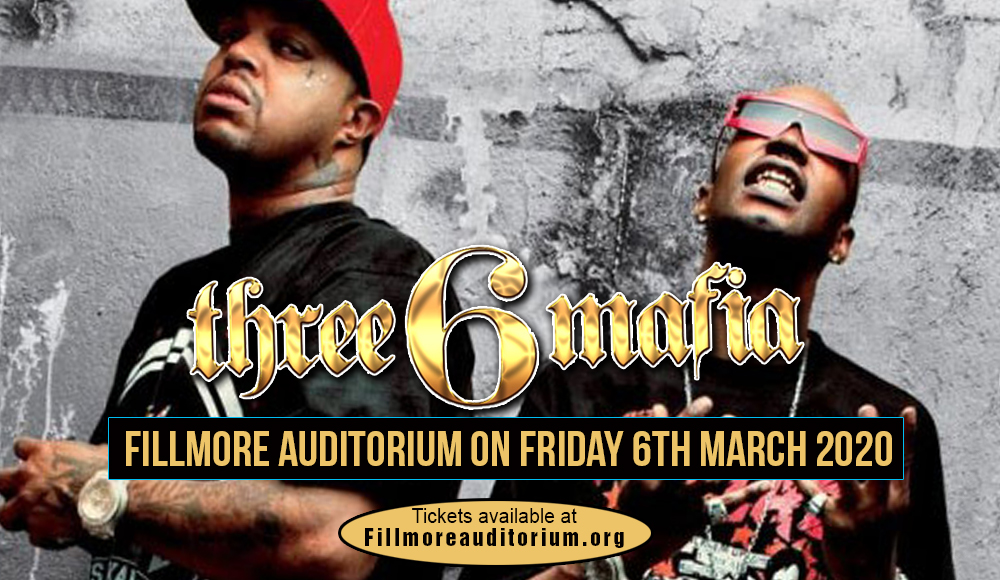 Three 6 Mafia has definitely gone a long way since emerging from Memphis, Tennessee as a horror-themed underground rap group. Known for always pushing the envelope of their music and style, they eventually went on to enjoy mainstream success. Their 1995 debut album "Mystic Stylez" would go on to become an influential cult classic. Not only did they achieve commercial success with reaching worldwide album sales standing at 5.5 million albums and still counting. They were the first rap group to win an Oscar for Best Original Song at the 78th Academy Awards for their song "It's Hard out Here for a Pimp" from the movie Hustle & Flow, and to perform at the prestigious Academy Awards ceremony. Then Hollywood beckoned as they starred in "Adventures In Hollyhood", an Ashton Kutcher-produced reality show that debuted on MTV in 2007.

After experiencing a number of line-up changes through the years, and the unfortunate passing of two of its members, Lord Infamous and Koopsta Knicca, the group is finally pared down to only its essential members. Were the last two dudes to walk, DJ Paul and Juicy J, Juicy J explains. And it certainly is a delight for the legions of fans seeing them walk and slay the concert stage as the put the word out that Three 6 Mafia reunites for an official 2020 concert tour! In a statement announcing their reunion, DJ Paul said, “This year has already been a banner year for new music and production from both of us. I know this is what the fans have been asking for, so we’re ready to bring them the classics, along with our new music in the best possible way. "

This tour brings the group in high spirits and pumped-up more than ever. This is our eighteenth year making music and albums, DJ Paul says. Weve see it all and been through it all. A lot of people cant say that theyve been around and are still being successful after 18 years.

Shout out to all your friends, gangs, homies and get together at the Three 6 Mafia concert. Book your tickets now!