Oh honeyyy… RuPaul's Drag Race All Stars season three winner and platinum-blonde bombshell Trixie Mattel brings her incredible one-woman show to Fillmore Auditorium on Wednesday 20th June 2018! Veering from salty to sweet, Now With Moving Parts is a night of comedy and song from one of the world's biggest drag superstars! Watch her slay, live! 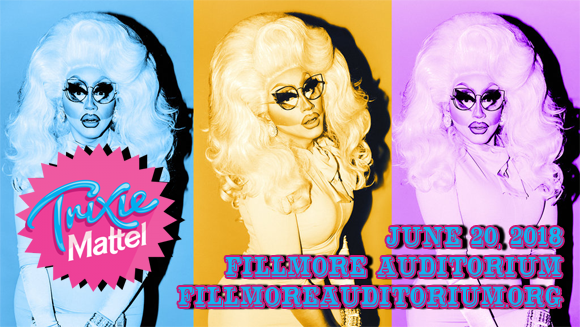 First performing in drag in 2008 in the Milwaukee and Chicago drag scenes, Trixie Mattel is an American drag queen, singer-songwriter, comedian, and television personality, who rose to fame in 2015, competing in the seventh season of RuPaul's Drag Race. She released her debut album, the folk/country album Two Birds, in 2017. Mattel went on to compete in the third season of RuPaul's Drag Race All Stars, which she won. Mattel released her follow up album, One Stone, on the night of the season finale, having launched the album's lead single, “Moving Parts”, the night of the season premiere.